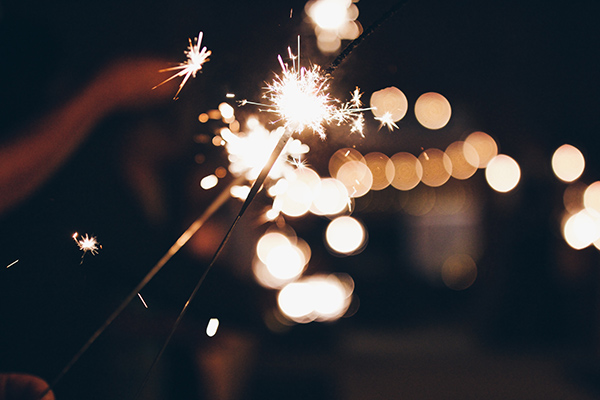 One word of warning before we start. Most young children won’t be able to stay up until midnight, and those who do may have their sleep pattern disrupted by the late night. Extending bedtime by an hour as a special treat is enough time to satisfy most children without leaving them tired and cranky the next day.

Make a New Year’s Resolution as a Family

Making New Year’s resolutions is a yearly tradition in most households, and there’s no reason the family can’t make a resolution together. Possible family-friendly resolutions include:

You can reinforce and encourage resolutions with small rewards. For instance, children might be more willing to have a weekly games night if you surprise them on New Year’s Eve with a unique game such as Our Family’s Race Across the U.S.A., which personalizes the board and game tokens with your family’s name and photos.

Make counting down to the new year more fun for kids with countdown bags. One of the most popular New Year’s Eve family ideas, countdown bags are simply brown paper bags with the hour written on them. Inside each bag is a small surprise to keep children occupied until the next hour comes around. Ideas for inside the bags include:

This is another of the easier New Year’s Eve activities for families that gets everyone involved. Choose a nice box or large mason jar, and have the kids decorate it. Everyone chooses one or two items that relate to something they did that year, and all these treasures go into the time capsule. Decide as a family when to open the time capsule (the next new year is plenty of time for small children). When you open the capsule, everyone gets to share in the memories.

This is perhaps the most complicated of our New Year’s Eve family ideas, but the effort is well worth the payoff. To make your own balloon drop you’ll need:

Cut the tablecloth in half, punching holes along either side of the cut. Weave yarn loosely through the holes to hold the two pieces together, leaving about two or three feet of yarn at one end. You want the yarn to slide out easily when you pull on the loose end.

Using the painter’s tape, secure the tablecloth to the ceiling at either end, leaving the middle loose enough to add balloons. Tape the loose end of yarn to the ceiling as well, so little hands can’t drop the balloons early.

Blow up the balloons (a balloon pump will make this much easier), and gently push them between the ceiling and the tablecloth. Sprinkle in some confetti if you want.

When the time’s right, gather the family under the balloon drop and pull on the yarn to release the balloons. Be sure to have a camera ready to record the fun!

Our Top 5 Christmas Books for Kids

How to Teach Your Child About Black History Month

5 Fun Ways to Spend Father’s Day as a Family